You may remember from a few years back there was a campaign to get one at-bat for baseball player Adam Greenberg. In his first Major League plate appearance back in 2005 with the Chicago Cubs, Adam was struck in the head on the first pitch he saw, or rather didn't see, and this sent his career on a downward spiral he had never anticipated. Adam became limited by the physical affects of the hit-by-pitch and stuck it out for years in the minor leagues for one more shot at making it to "The Show." With the help of filmmaker Matt Liston, Adam eventually was offered a one-day contract by the Miami Marlins and got to step to the plate once again.

I had the chance to speak with Adam about his story of perseverance, passion and love for the game of baseball. The guy's willpower is an inspiration and I highly recommend you read the interview below.

Brandon Steiner: Let’s start at the beginning. Baseball- what role did the sport play in your life growing up? When did you realize that you had a chance to become a Major League ball player?

Adam Greenberg: Baseball was a part of my life as far back as I can remember. I remember watching every Yankee game I possibly could. Instead of listening to music before bed or reading a book, I was hooked into sports radio or the Yankees on the radio. Each morning I would be sure to look at the newspaper to see how the teams fared and I would especially check on my hero Don Mattingly. I wanted to play Major League Baseball, and I was going to make it happen. I did play 3 sports all the way through high school. Baseball, basketball and soccer. When I was 13 I realized that my childhood dream was starting to unfold and I believed more than ever that I was going to play MLB. I had made the first CT AAU team in history and we went to Des Moines IA to play in the national championship. That tournament we not only made an appearance, but we won the national championship. I made the all-tournament team and that experience changed my life forever. 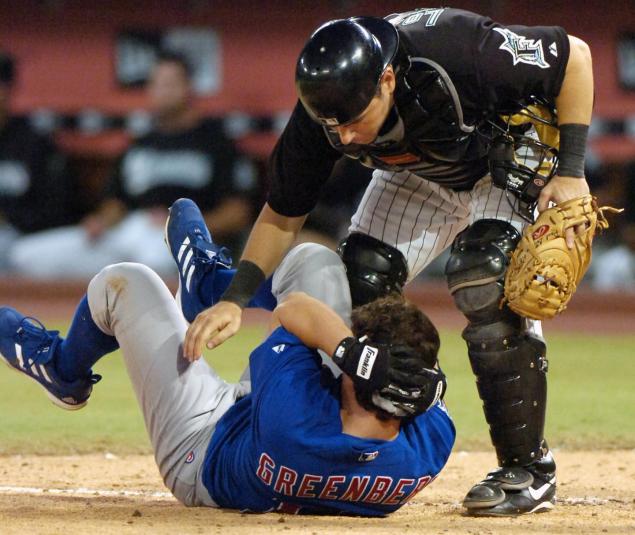 Adam Greenberg seconds after being hit in the head.

BS: July 9, 2005. What do you remember from that day before the pitch as you prepared for your first career Major League game?

AG: Its crazy, while I can vividly recall every word spoken to me right before the at-bat, every step I took walking to get my helmet in the dugout, to passing Dusty Baker going to the on deck circle, to telling the umpire I was pitch hitting, to looking in the outfield and noticing Juan Pierre was shading me towards left field, to the wind up by Valerio Delos Santos, to seeing the ball released out of his hand, to the mindset I was in and the thoughts running through my mind as the pitch was on its way, to the crack of the ball against my skull, to grabbing my head with both hands praying I could hold my skull together, to my eyes rolling in the back of my head etc there is very little that I remember about the actual day of the game except I was in the big leagues and I was ready to begin my career as a Major League Baseball Player

BS: You worked your whole life to get to that moment. In the immediate aftermath of the incident how did you deal with not just with physical pains, but also the mental pain of getting on the cusp of realizing your dream?

AG: The immediate aftermath, meaning the next few days wasn't so bad mentally. I was a big leaguer, I had 3 days to recover due to the all-star break and I believed after a couple days, I would be fine and back playing and realizing my dream. The physical pain did end up being the easiest to deal with. The mental pain of not understanding what was going on with me, not having the proper diagnoses' of Benign Paroxysmal Positional Vertigo, Visual Alignment being off and of course post-concussion syndrome it lead me into a minor state of depression. Especially after I tried coming back 21 days after my incident, playing in 1 minor league game, to only have ALL the symptoms come back ever stronger the day after my first rehab game. In my heart however I knew that was not going to be it for me.

BS: Despite the incident you continued to play independent baseball for years. What drove you?

AG: Getting 1 major league at bat and having it last 1 pitch and not get a chance to swing or even make it out of the batter's box, was not the way I wanted it to go down. I worked my whole life to PLAY major league baseball. The burning desire to make it only grew stronger after the incident. After stints with the Dodgers, Royals, Angels, Reds, and the Independent League Bridgeport Bluefish, many ask why I continued to keep going. Simply put, I love baseball and wanted to do everything I could through hard work and determination to get another opportunity in the big leagues.

BS: How do you define passion?

AG: Passion is a spark inside of someone that cannot be measured. It’s an intensity that keeps you pushing forward. Passion is going after or doing something that you love.

BS: When you first learned that filmmaker Matt Liston had started a campaign to get you one at-bat, what went through your mind? And, what did you think as you saw the campaign progress and actually getting another at-bat became a possibility?

AG: When I was first introduced to the concept I was caught off guard. It was crazy, that kind of stuff only happens in the movies, this was real life and this was baseball.

There was one overriding thing that was not allowing me to turn Matt's passion and "crazy" idea off, that was thinking to myself I would be a hypocrite. I am a firm believer in anything is possible if you believe it, have passion and are willing to put in the work/effort. Because of that I wished him the best of luck:)

The main thing I was looking for through the campaign was an invite to spring training. One more opportunity to showcase my skills and ability to get in an organization and work my way up to the bigs. There was the tiniest piece of my brain that started to believe that something was going to happen, exactly what, I had no idea.

BS: Did you think your at-bat opportunity with the Marlins would be met by scrutiny from players on the team, and players around the league? Did they embrace you?

AG: I could not have had a more unbelievable welcoming by the Marlins players, staff and personnel. The dream come true "again" as I like to refer to it, was made to be the greatest day of my life because of the reception. I made it on my own accord, my own merit, my own skillset back in 2005. I never quit, I continued to perform and help teams win each year after my incident. Having played many years with and against a lot of the players on the team, I was embraced. Names to remain nameless but a couple former teammates actual spoke in front of the team and validated to everyone I deserved and earned the opportunity to get one more shot. That will be cherished forever.

BS: What does it mean to you having been given the opportunity to step on a Major League field after everything you went through?

AG: Dream Come True Part 2...could not be more appreciative and grateful, not just for myself, but for everyone out there that has a dream, has passion, has struggles, has difficulties and challenges to believe that anything is possible and to never give up.

BONUS: What’s next for you?

AG: I own a nutrition company called Lurong Living that I have incredible passion for. I love changing people's lives in a positive way. I also do motivational speaking engagements throughout the country for corporations, teams, religious organizations, etc. and teach some private baseball lessons. Who knows truly what the future holds, that is one thing I am certain of but I do believe baseball will always be a part of my life. I love the game of baseball for so many reasons and I am so grateful to have had the privilege to play a game I loved for so many years.

Adam Greenberg is now a motivational speaker, making appearances around the country. Book Adam to speak and follow him on Twitter.