It’s early, but Spring Training is getting into full swing. A report surfaced earlier this week that Josh Hart, a 19-year-old outfielder in the Baltimore Orioles minor league system, didn’t know who the legendary Frank Robinson was. Buck Showalter, the Orioles Manager, made Hart write a one-page report on Robinson.

Here’s an excerpt from an ESPN report on the story: 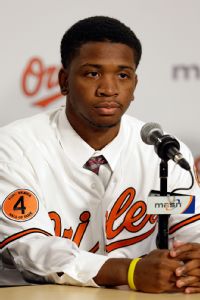 AP Photo/Patrick Semansky
Orioles minor leaguer Josh Hart, after telling Buck Showalter he didn't know who Frank Robinson was, wrote a report about him at the manager's request.

“Baltimore Orioles minor league outfielder Josh Hart hasn't spent much time, if any, gazing at the photo gallery of Hall of Famers at the team's facility in Sarasota, Fla.

But there's a reason they're there, manager Buck Showalter says.

You have to know your Orioles history.

It's the same reason Showalter demanded a homework assignment of Hart about one of those players that lines the clubhouse hallways.

Showalter, during an appearance on ESPN Radio's "Mike & Mike" on Wednesday morning, gave the paper an "A-plus."

But more important than the grade, Showalter said, was Hart's new-found understanding of what Robinson has meant to the franchise.”

It’s nice to see that this story seems to have a happy ending, but in reality, it shouldn’t have come up in the first place. You should always know your history because you can learn from it.

Whether you’re a professional athlete working for a sports franchise that has had past successful eras, or if you’re an accountant working a desk job for Company XYZ, it’s important that you make yourself aware of who has come before you and what has made your organization successful. Having an awareness of your industry is important, as well.

Sure, companies, employees and customers change, but your bread-and-butter, the things that made your early success will not. Those things can always be revisited. Take Steiner Sports as an example. We've been in business almost 27 years now and a lot of our most recent success is based on initiatives that we have brought back from some of our earliest years.

So, revisit your history and ask either yourself or your employees:

You don’t have to reinvent the wheel today to come up with an idea for tomorrow. Look at what you did yesterday.